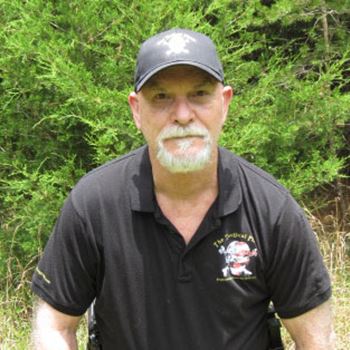 About The Tactical Pirate

John Cello is the president and lead instructor at The Tactical Pirate.

John brings relevant experience to his classes. Unlike other instructors, he doesn’t instruct from theory, but rather from the practical application of weapon handling techniques that he has employed in the real world.

An NRA certified instructor and a retired member of the Georgia Army National Guard where he served as a Military Policeman, he has a long and varied training background.

John is a former sworn law enforcement officer, having served in the patrol and criminal investigation divisions of a municipal police department. He spent several years on a multi-agency narcotics task force in an undercover capacity. He was responsible for writing his agency’s documentation establishing a tactical team, wrote its first operational manual, and was on the first team.

In his military career, he deployed to Iraq in 2008 where he served on the personal security detail for the Brigade Signal Shop at Camp Bucca. Deployed to Afghanistan in 2009 – 2010, he was assigned to a Police Mentoring Team in Kunduz Province working with the Afghan National Police as a trainer. John’s PMT team trained the Afghan Police on general police procedures with an emphasis on patrolling techniques and weapons employment.

John’s second tour in Afghanistan in 2012 – 2013 had him assigned as a squad leader on the quick reaction force (QRF) at Camp Phoenix providing emergency response to the Kabul Base Cluster. For actions in this position, he was awarded the Bronze Star medal.

Cancellations accepted for full refund less 12% processing fee 6 days or more prior to class date. Within 5 days or less a 25% cancellation fee will be charged. No shows on the day of the class forfeit the entire registration fee.

Cancellations accepted for a full refund less 12% processing fee 6 days or more prior to the class date. Within 5 days or less, a 25% cancellation fee will be charged. No shows on the day of the class forfeit the entire registration fee.

Q: Do you supply ammunition?
A: No. It is the responsibility of the student to bring the amount of ammunition required for the course.

More FAQs can be found here.