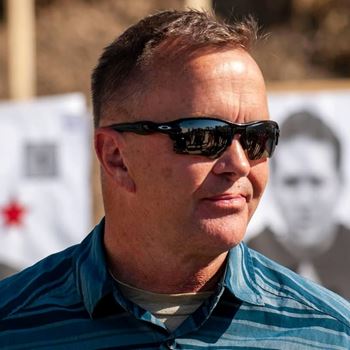 John recently retired after 25 years of service in the Marines and the intelligence community, but he makes no claim to being a combat veteran. He considers himself very fortunate to have trained under some of the most respected firearms instructors in the country, and he’s learned much more about shooting and self-defense outside the military than he ever did during his service. As an instructor, John has incorporated the best and most practical methods and techniques into his courses, and he continues to train and refine his skills every year, both as a defensive shooter and as a trainer. John has presented classroom and range instruction at the multiple Rangemaster Conferences, and currently holds a “Master Instructor” rating from Rangemaster, and is a graduate of Massad Ayoob’s “Lethal Force Instructor” program.

Courses will be conducted rain or shine, but extreme weather may force cancellation or re-scheduling.  Courses may also be cancelled or postponed due to insufficient attendance.  Students will be notified as soon as possible in this event so that they can reapportion their time.

If students cancel a reservation more than 14 days prior to start of class, the course fee, minus a $50 administrative charge, will  be refunded.  Within 14 days students will be charged 50% of the course fee.

By signing below and in exchange for the opportunity to participate in or observe training opportunities (“Classes”) offered by FPF Training, LLC (“FPF”), the undersigned (“Participant”), and if Participant is not at least 18 years of age, Participant’s parent or guardian, each indicate that she or he has carefully read and understands this General Release, and acknowledges and agrees to the following items, on behalf of Participant and her or his heirs, guardians, representatives, successors and assigns.

<![if !supportLists]>(b)     <![endif]>Participant is legally permitted to possess and use firearms, including airsoft and other firearms simulations, and other related equipment (“Firearms”), whether as part of Classes or otherwise, and is capable of using Firearms safely. FPF does not provide guidance on the specific legality or effectiveness of skills taught by FPF, whether related to Firearms or otherwise. Participant is responsible for determining the requirements of all applicable laws as they may relate to ownership, possession, and use of Firearms and the exercise of skills taught by FPF, whether related to Firearms or otherwise, and for remaining in compliance with such requirements. While present at any Class, Participant will follow all rules and instructions communicated by FPF. FPF reserves the right to temporarily or permanently revoke Participant’s right to participate in or observe any Class at any time for any reason and without refund of any associated fees paid by Participant.

<![if !supportLists]>(c)     <![endif]>Participant has made a fully informed decision to voluntarily participate in or observe the Classes, understanding that inherent in the nature of Classes and the use of Firearms is the potential of property loss or damage and physical or psychological illness or injury which may be temporary or permanent and could include serious disability or death (“Damages”). Participant understands that the use of Firearms and Participant’s presence at Classes may involve risks (unforeseen or otherwise) and that Participant is responsible for her or his own safety and behavior, including following the safety directives given by FPF’s instructors and staff, using appropriate personal protective equipment, and refraining from the use of substances that may alter Participant’s mental state. Participant is under no obligation to participate in or observe all or any part of any Class, and is permitted to leave a Class or to decline full or partial participation in a Class at any time for any reason. Participant will inform FPF of any condition, medical or otherwise, that may affect or limit Participant’s ability to participate in or observe any Class.

<![if !supportLists]>(d)     <![endif]>Participant waives, releases, and forever discharges any rights, claims, demands, objections, damages, or liabilities (“Claims”) which Participant has, now or in the future, against FPF; its affiliates, sponsors, partners, and hosting facilities; or any of its or their members, managers, employees, instructors, agents, representatives, assigns, or successors (past or present) (the “Released Parties”), including for any Damages, in connection with Participant’s presence at any Classes, regardless of the cause of such Claims. Participant understands that this General Release is intended to discharge, release, and waive any and all Claims arising from her or his participation in or observation of any Classes or his or her use of Firearms, even if such Claims arise from the negligence of any Released Parties and whether such Claims arise during or after any Classes. Participant agrees to indemnify and hold harmless the Released Parties from and against any Claims that Participant or any other individual or entity has or may have for Damages arising in any way from Participant’s presence at any Classes or from his or her use of Firearms.

<![if !supportLists]>(e)     <![endif]>FPF may designate personnel to capture images and recordings of Participant during Classes (the “Media”). Participant consents FPF’s unlimited use of the Media for an unlimited time in all mediums, including on social media, without approval by or compensation to Participant. All Media is owned by FPF, and FPF may register any copyrights or other intellectual property rights in the Media. To the extent Participant has any copyrights or other rights in the Media, such as a right of publicity, they are assigned to FPF. Participant waives all rights or claims in any media or material using Participant’s name, image, voice persona, or likeness contained in the Media. FPF is only responsible for Media captured by its designated personnel; other individuals or entities present at Classes are responsible for obtaining their own permissions and Participant understand that FPF has no control over these other individuals or entities.