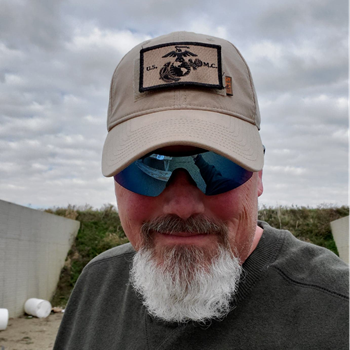 Like many shooters my father started me young.  He was a pistol and rifle competetive shooter for the US Air Force and a tactical instructer for the USAF Military Police, which was his primary duty.

I too chose a military path joining the US Marine Corps.  I earned both rifle and pistol expert badges, which I maintained during my time in the Corps.  I made three deployments, including one combat deployment.

After my seperation from the Corps I became a police officer.  There I was introduced to the difference between armed conflict in a foreign land and self defense shooting, and this has become my focus as a self defense instructor.

I hold Instructor certifications from both the NRA and the USCCA.  I also spend time in other instructors classes, sharpening my own skills and learning new ones.  There is usually a different, and sometimes better, way to do something and the more you train with others the more you will obsorb what is out there.

I love what I do and hope that you will come and train with me.

Refund of deposit up to 24 hours before class day.

If you cannot make the class notify us at least 24 hours in advance.  We will reschedule you to the next available class.

Refund of deposit if you notify us at least 24 hours before beginning of class. No refund after class begins.

Tiburon Tactical waiver of liability will be provided at the beginning of class.  Waiver must be signed and dated by the student before instruction begins.

"Do I need to bring my own pistol and ammunition to class?"

I am happy to provide pistols in various calibers and sizes for students to use, as well as eye and ear protection.

I have in the past provided all ammunition for class use, but the recent ammo shortage has made it neccessary for students to bring their own ammunition.  50 rounds minimum, depending on the nature of the class.