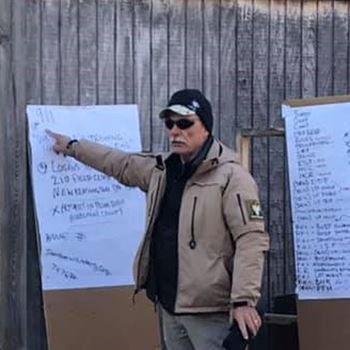 We started "McFadden Firearms Academy LLC" because we saw the lack of good training for those that may already have their CCW and want more training. The vast majority of training academies provide large classroom CCW training and in some cases, very little practical gun handling. We saw the need for something more. We know that the basic CCW course is just not enough for the average citizen to carry a gun in self defense, in fact most CCW courses are only safety and education classes and not considered training. We can bridge that gap for those that want to go to that first level of training.

While we do train church security teams in firearms and tactics, we are not a church security company. We hope to bring people on board in the future to do that. There are many companies that specialize in that area. We are more than happy to point you in their direction. We also recommend that you work closely with your insurance carrier  when implementing a church security plan.

We offer an 8 hour Defensive Pistol Level 1 course that initially required about 400 rounds of ammunition. Due to ammo costs and availability we have broken that course down into three shorter 2 hour courses. Intro to Defensive Pistol is the foundation course of the 3 courses. Home Defense - Defensive Shooting and Concealed Carry Defensive Shooting take you through the remainder of the 8 hour course. We have also paired the 8 hour course down to take 300 rounds or less without sacrificing skill building and depending on how much the student wants to pull the trigger.

A word about gear:
There a plenty of gun shops that will sell you the gun they think you need. We see a large percentage of gun buyers are now ladies. Many women have their own issues with finding a gun that fits them correctly. Sometimes that little "pocket gun" isn't the right option for you or for the lady in your life.  We recommend going to a range that rents guns and find out which gun you can shoot well and conceal well.  Try several over a period of time.

When you come to one of our classes we want you to get the most out of the training experience and not "fight your gear" by having a gun that you can't efficiently operate or a cheap belt and holster. Part of the training experience is finding out what gear works and what gear doesn't work but we want you to come as prepared as possible.  We recommend the "carry system" approach where all or most of your guns will work with all or most of your holsters. This allows you to vary your carry gun without starting over on the rest of your gear.

We also see students spend money on upgrades for their pistols such as sights, grips and trigger jobs. Upgrades are great but they won't make you a better shooter. We can't buy that. The only way to be a better shooter is to shoot and dry fire.

These are some gear choices that we see work. (we don't have any $$ interest in them)
Holsters: Bravo Concealment, We The People, Crossbreed, Galco, Bladetech
Belts: Amish made, Hanks, Deluthe Trading Lifetime, be prepared to spend $50 to $80 on a good belt
Magazine Holders: Blackhawk, Pitbull
Guns: Glock, SW M&P, Sig Sauer (We have seen much more expensive guns take dumps after a 1000 rounds in a class)
There is a lot of other great guns out there as well.

TRAIN AND CARRY YOUR GUN WHENEVER YOU CAN

Cancellation must be no later than 7 days before the course date to receive full refunds.

McFadden Firearms Academy LLC reserves the right to cancel or reschedule any class due unsafe range conditions. We will generally present our classes rain or shine unless conditions are unsafe.

You may also register for most of our classes on the USCCA website.  Just go to IN-PERSON training and search by zipcode 44615 to bring up our courses.

Students are required to cancel at least 7 days in advance of a class date in order to receive a full refund. Classes cancelled less than 7 days before the class will not be refunded.

McFadden Firearms LLC reserves the right to cancel any training program at any time with reasonable notice given to participants. If a class is cancelled, refunds will be paid in full or participants may apply their credit toward future training classes. In the event of a cancellation, McFadden Firearms Academy LLC is not responsible for any non-refundable travel expenses or penalties a participant may incur. This includes but is not limited to, air travel, hotels, ETC.

McFadden Firearms Academy LLC does not permit anyone other than paid students on-site during classroom or range activities. All waivers must be signed and fees paid before the start of class.

Anyone who repeatedly displays improper gun handling skills or behaves in an unsafe manner will be asked to remove themselves from the premises without a refund.

WE REGISTER STUDENTS ON SEVERAL OTHER SITES, THEREFORE THE CLASS SIZE AND CAPACITY MAY AND WILL VARY FROM THE NUMBERS LISTED ON SHOOTINGCLASSES.COM.

Disclaimer
McFadden Firearms Academy LLC reserves the right to deny training to anyone for any of the following reasons:

Can I bring revolver? Revolvers work for our CCW course but not so well for our Defensive Pistol courses.
What if I don't have a gun? We have loaner guns. Ammo is available at market price.
What should I bring? Every course includes a required equipment list.
I am new to shooting, what if I can't do it? No worries, we keep CCW classes small to give special attention.