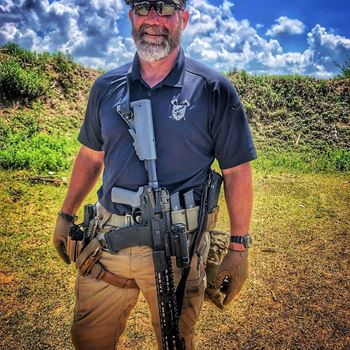 Todd Nielsen retired as a full-time police officer in August 2015 and now runs a firearms training and consulting company in Northern Utah. He started his law enforcement career in 1990 with the San Jose Police Department. During his tenure, Todd served in many Special Operations units which consisted of a covert and plain clothed Narcotic Enforcement, Critical Incident Teams, Rapid Containment Teams, Crowd Control and also doing High-Risk Warrant Service with his department and in conjunction with other local SWAT teams.

Todd has been a Field Training Officer (FTO) for over 10 years and an AR-15 Operator (Specialist) for over 17 years. This has given him an opportunity to train many new and veteran officers. This has also allowed him to be a team leader most of his career.

Todd served as part of the Secret Service Dignitary Protection Operations for Presidents Clinton and Bush. As part of being a full-time instructor for his department, Todd developed and implemented a low-light tactical training program along with training all in-service officers in Active Shooter Tactics, Use of Force, Dynamic and Slow Search Tactics, First Aid and CPR.

Todd has worked as a Lead Instructor for a large domestic tactical training firm and has trained law enforcement officers from across the country, military contractors, and military personnel with the Joint Special Operations Command (JSOC) on numerous occasions prior to their deployments overseas. He has also been awarded an Outstanding Police Duty Award for his actions in June 2011 for hearing the sounds of gunfire, setting up a rapid response team, and arresting the still-armed shooter within minutes of him doing the shooting.

Since retiring, he has moved the Nielsen Training & Consulting base of operations to Central Utah. He has consulted with several product manufacturers on development of products for the firearms and tactical industries. He also acted as a stuntman and a tactical and firearms expert in some small films.

Along with firearms and shooting, one of Todd’s hobbies is scuba diving. He was awarded the William Poelle Life Saving Medal for pulling a drowning diver out of the heavy surf and performing CPR on her to save her life in 2005. He is a member of the National Tactical Officers Association (NTOA) and a proud Life Member of the NRA. He is also a proud supporter of Operation Care and Comfort, the Seal-Naval Special Warfare Foundation, the National Law Enforcement Officers Memorial Fund and the COPS foundation.

If Nielsen Training and Consulting has to reschedule a course the course fees will be roilled into the next course in that area.
If the class is cancelled then there is a full refund for all students.