Before getting into a discussion on preventing negligent discharges, let’s make a clear distinction between Negligent Discharge and Accidental Discharge.

By far, probably 99% of the time, discharges are the result of negligent acts. Too often, a person has a non-planned discharge and will call it an accidental discharge, as in “I didn’t mean to, it was an accident.”

However, an Accidental Discharge is the fault of the weapon itself, which is usually a mechanical issue. Although rare, this is why we always adhere to the rules of firearms safety and always keep firearms pointed in a safe direction.

A Negligent Discharge is when a PERSON – not the gun – negligently causes the discharge.

It seems like we are hearing more and more of people having negligent discharges. Maybe that’s because of cameras being everywhere and because so much ends up on social media. Maybe it’s also due in part because people lack proper training. Statistics show that over 17 million people now have concealed carry licenses in the United States. However, less than one percent of those concealed carry license holders have taken any formal firearms training beyond what it took to obtain their licenses, which is not much training at all. And this does not count for untold additional people who frequent a range who do not have a concealed carry license.

The most recent negligent discharge that I’ve seen was a Facebook post from one of our instructors at Templar Defense. The post spoke to why a man accidentally shot himself while attempting to pull up his pants when he was on the firing line at a range. 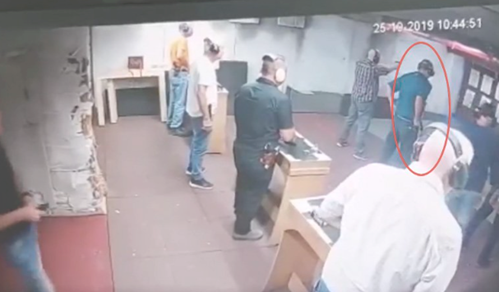 In this situation, the negligent discharge was attributed to what is called “sympathetic reflex.” This is when one hand reacts to what the other hand is doing – your off-hand grabs at something (in this case, his pants) and the strong hand subconsciously reacts and tightens, pulling the trigger. This action is a natural tendency. The real issue here is having your finger in the wrong place when this happens.

My reaction, and I suspect others as well, was to ask: “When will people learn to keep their finger off the trigger?” This post got similar responses including the ever popular “Keep your booger hook off the bang switch”. Sounds so simple, huh?

Those of us who shoot and train on a regular basis do not give this a second thought. That is why we don’t understand why this happens way too often.

I recently read an article where an instructor had a negligent discharge while demonstrating a close encounter force-on-force situation. He demonstrated grabbing a target (threat) and sympathetically squeezed his strong hand as he held his firearm at his side. His finger was extended outside the trigger guard, but sympathetic reflex pulled his finger back into the guard, pulling the trigger and shooting himself in the leg.

Most instructors I’ve trained with tell students that proper placement is putting your index finger along the slide (assuming semi-auto pistol) so that it is up and away from the trigger.

A very good tip that I learned during a morning safety briefing while taking a class last year with one our partners, Dave “Boon” Benton, was to keep your index finger up on the frame above the trigger guard with tension. The point of this is that if you maintain tension, whether your finger is up on the frame or up on the slide, you have prepped your finger for any potential sympathetic reaction; and will not find your finger inside the trigger guard with a potential for a negligent discharge. This applies at all times when you have a firearm in hand, standing still or moving in any direction with a potential for a sympathetic reaction to occur. 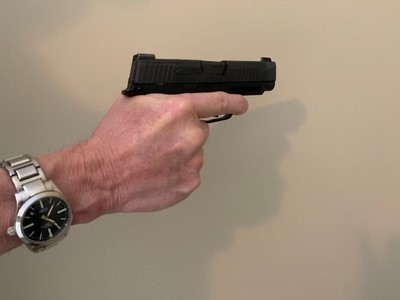 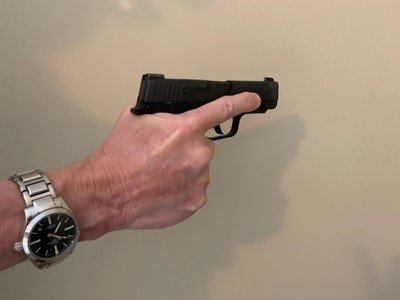 This brings me to the importance of Dry Fire Practice in preventing negligent discharges. (I would be negligent if I didn’t caution that dry fire practice must be done with a confirmed empty firearm and magazine and all ammo out of reach. Personally, I like to practice with a SIRT pistol that was designed specifically for the purpose of dry fire training.)

We all try to practice dry firing some percentage of the time to improve our skill level and practice the fundamentals of shooting: grip, stance, sight alignment/sight picture, breath control and follow through. But do we intentionally integrate safety into our practice? When practicing skill, make sure you practice the following safety techniques:

Repetitive practice is how we learn, so always include safety when practicing Dry Fire.

Remember, firearms have many forms of internal and external safeties built in to prevent Accidental Discharge. But preventing a Negligent Discharge is OUR responsibility. Be sure to practice and teach safe firearms handling.

Learn about shooting lessons, or find firearms training classes and instructors in your area.